Instead of inviting a translator to the hearing, Meschansky district court judge V.A.Diachkova first taught names of the months and digits in Russian to the individuals detained for alleged administrative offense, and then just ordered their expulsion from Russia without due consideration of the case and with gross violation of the judicial procedure. 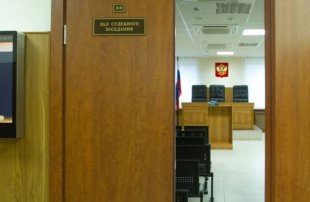 Recently a striking dialogue was recorded by Ivan Geronimus in the Meschansky District Court where Ivan came to accompany an applicant of the Civic Assistance Committee. Sadly, the conversation was illustrative of the treatment that foreign citizens receive from many of Moscow’s judges. Below is the script of the conversation. The judge was V.A.Diachkova. That day, she was hearing the cases of two detained individuals at a time. The whole hearing only took her a bit more than five minutes.

Below the script, one can find short extracts from the law that can give one an idea of what required procedures were violated by the judge.

One can hear the Detained 1 silently speak in a foreign language (other than Russian).

Judge: Your date of birth. When were you born? Name it by digits.

Police officer (to the Detainee No. 2): Translate it. He should say, not write. When is his birthday? Does he speak Russian?

Judge (to the Detainee No. 2): Translate it.

Police officer (to the Detainee No. 2): What, do you not speak his language?

Observer: may I call his father? He speaks fluent Russian. He is in the hallway.

Judge: You know the digits. One, two, three, four. So, say it by digits. The day – which digits?

Pause. One can hear somebody speak in a foreign language (other than Russian).

Judge: Do you have a wife?

Judge: Do you have children?

Judge: Do you work? Do you?

One can hear somebody silently speak in a foreign language (other than Russian).

Detainee No. 2: (asking with uncertainty) Did I get it done? I got it.

Judge: Aha, through intermediaries. Sit down. See? He understands everything just like this.

Judge (to the Detainee No. 2): Your full surname, first name, patronymic name.

Judge: Date of birth. Digits. Say it. Say it by digits. Now, who is there walking back and forth?

Observer: This is his father.

Judge: I understand everything. Please stand up, dear audience member. As to your comments, “Robot, not robot, in a human way…”, there is legislation in force that prohibits violation of a court hearing order. This is neither about robots nor about humanism, this is the law. You understand it, don’t you?

Judge: Which day is it? Let’s start with this.

Judge: Great. Did you go to school? Do you have a wife? Kids?

Detainee No. 2. (with uncertainty) I do.

Judge: Has children… little ones…

Judge: Do you work? Do you have a patent?

Judge: Usually one first gets a patent and then works.

Detainee No. 2: I did get the registration.

Judge: So I am wondering when you got your registration…

Judge: Did you do it through intermediaries?

Detainee No. 2: (repeats, confused) “through intermediaries”?

Judge: Well, where did you go, to the UFMS (Directorate of the Federal Migration Service), or did you just give someone money to have your registration done?

Detainee No. 2: (confused) the landlord gave me money…

Judge: The landlord did it for you, I see now… Sit down. I am withdrawing to deliver the judgment. No walking in the courtroom. No going out of the courtroom. Understood? Wait here. Audience, you too, please. That you decided to be a member of the audience does not mean you can come in during the procedure whenever you want. One comes in in the beginning and does not violate the order of a hearing.

Silence, from time to time one can hear the migrants silently talking to each other in a foreign language. Then the police demand them to sign some papers and take them to the police department.

There was no announcement of the decision. Eventually, once the decision was later handed in, the father of one of the detainees who is fluent in Russian learned that his son was getting expelled from Russia and was ordered to pay a fine in the amount of 5 thousand rubles. With the help of the Civic Assistance Committee, they filed an appeal against the abuse of power and violation of all the court procedure requirements. On 12 December 2018, lawyer Ivan Novikov will defend their rights to respectful treatment and just court proceedings irrespective of ethnicity, nationality or specific administrative charges in the Moscow City Court.

The requirements to holding a hearing of such cases are set forth by Article 29 of the Code of Administrative Offenses of the Russian Federation, in which the “order of hearing a case on an alleged administrative offense” is specified. This order must include the following procedures:

In addition, the statements of other persons participating in the hearing must be heard, and upon closing of the hearing the judgment must be immediately announced as well as the limitation term and the procedure of appeal.

The general principle of the proceedings before the court, according to Article 24 of the Code of Administrative Offenses of the Russian Federation, is “comprehensive, full, objective and timely identification of the circumstances of each case, its resolution in compliance with the law.” It should be specifically mentioned that the same article guarantees the right to a translator, in particular, “the individuals taking part in the hearing of a case on an administrative offence and not having command of the language in which the hearing is held have the right to speak and provide clarifications, file motions and objections, bring in complaints in their native language or in another freely chosen language, as well as to employ the services of a translator.”